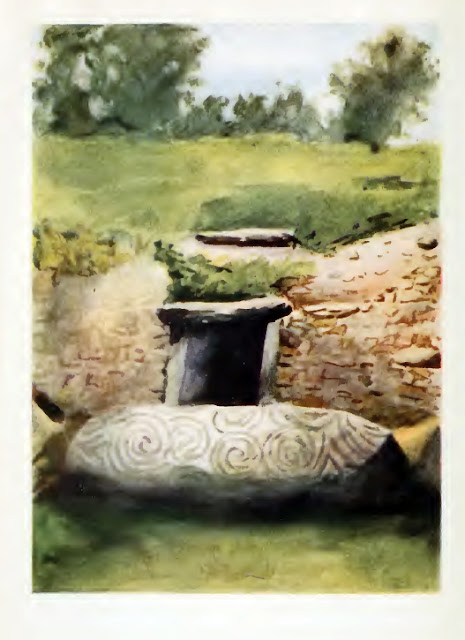 A colour illustration showing 'Brug na Boinne', from 'The Mythology of All Races', Volume III, Louis Herbert Gray (editing), 1918. Here is the caption that was included with the image:
The tumulus at New Grange is the largest of a group of three at Dowth, New Grange, and Knowth, County Meath, on the banks of the Boyne in the plain known to Irish tales as Brug na Boinne, the traditional burial-place of the Tuatha Dé Danann and the Kings of Tara. It was also associated with the Tuatha Dé Danann as their immortal dwelling-place, e.g. of Oengus of the Brug . . .

At the time this painting was made, Newgrange had not been excavated (the archaeology would begin in the 1960s). As you can see, the roofbox above the entrance is blocked up and grass is growing from it. There are trees atop the mound, and back in those days it had a very natural, although somewhat forlorn, appearance.
Back to blog