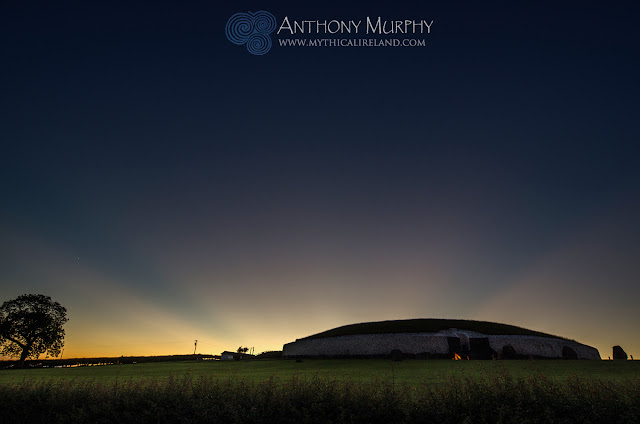 Tonight at Newgrange was very interesting. Having taken pictures of the sun setting behind Newgrange from Staleen, at the Boyne Canal, and then up on Red Mountain, I decided to head to the monument itself with my daughter Amy. We wanted to see if we could see the aurora borealis which had been forecast. On arrival at Newgrange, almost 45 minutes after sunset, we were greeted by the strange and wonderful sight above. There were huge beams being cast into the sky, as if the sun had just set. It might have resulted from some atmospheric scattering of sunlight related to the aurora. I don't remember ever seeing this effect so long after sunset. But it was magical. It only lasted a few minutes - but long enough for me to get some photos, of which the above is probably the best. I have brightened the photo up somewhat. You can see that the floodlight under the steps at the front of Newgrange is already on.

This being the third of the three "standstill" days of Summer Solstice, the sun is at its lowest beneath the horizon for the whole year. Perhaps that had something to do with the above effect.

I got some nice sunset photos from Staleen and Red Mountain, and then we stayed at Newgrange to watch Venus, Jupiter and the Moon and got some photos of those before heading home. I will post more photos tomorrow.
Back to blog