Samhain is, by many accounts, the most important calendar festival in ancient Ireland. It was considered the beginning of wintertime, and the dark half of the year. Its opposite festival was Bealtaine, in May, contrasting Samhain with the renewal of life and the blossoming of many trees and flowers.

One of the most fascinating aspects of Samhain is its endurance in popular celebration. Today, we continue to celebrate Samhain as Hallowe'en, when we light bonfires, set off fireworks, and play games. The lighting of fires at sacred times in the calendar is a practice that is very very ancient.

In this video, I speak about Samhain and its celebration, and its origins. There is a reading from the work of Celtic scholar James Mackillop, on the importance of the festival of Samhain and how many things that happen at this sacred time of year are highlighted in the ancient texts.


Every third year, an important Feis or gathering was held at the Hill of Tara on Samhain. At the nearby Tlachtga, or Hill of Ward, the lighting of the Samhain fires was a fundamentally important act. That ceremony has been reestablished in modern times. Samhain was a time when it was thought most favourable for a woman to become pregnant.

In Mag Slécht in Cavan, the "principal idol" of ancient Ireland by Christian scribes, Crom Crúach, was worshipped. It is suggested that human sacrifices might have been offered to Crom Crúach, who was in fact called "Samhain" by some scholars.

Significant action that takes place at Samhain is highlighted in some of the early Irish texts. For instance, it is at Samhain that the Fomorians extract their taxes of corn, milk and live children. The demon Aillén mac Midgna came to Tara every year at Samhain to burn it down, until he was eventually defeated by Fionn Mac Cumhaill. A similar demon, known as Aillén Tréchenn (from trí ceann, three-headed) came from Cruachan in Roscommon, and caused havoc in all of Ireland, especially Emain Macha (Armagh) and Tara. The warrior Cúchulainn, who we encounter in the Táin Bó Cuailnge, encounters otherwordly damsels at Samhain, and of course this was the hallowed time of year when Aongus Óg and his otherwordly lover Caer flew off together in the form of swans (see the Cygnus Enigma).

Samhain was also the time when Midir whisked Englec away from Knowth/Cnogba, according to the Dindshenchas text about how that ancient monument got its name. Englec, a daughter of Elcmar, was the lover of Aonghus, but he was playing Samhain games with his friends. Midir took her away, to Síd ar Femin (Slievenamon in Co. Tipperary). Finding that she is gone, Aonghus performs a strange ceremony of mourning for her. He casts some "blood red nuts of the forest", which are hazel nuts, on the ground and makes a lamentation around them. American researcher Helen McKay has suggested that this is a metaphor for the children who died in Stone Age times, and that the casting of the nuts on the ground represents the placing of the bone fragments of the deceased on to the floor of the chamber of Knowth. (See separate blog post on the Nut Lamentation here).

I was lucky to have been able to visit Knowth yesterday, shortly before the monument is closed for the winter. I think it's ironic that the site should close at Samhain, when Aonghus's lover was whisked away and he lamented for her, and that it opens again at Easter, which may be an important aspect of Knowth's astronomical function.

Knowth's name is an anglicisation of its ancient Irish name - Cnogba, which according to the Dindshenchas is either from Cnoc Bua, the Hill of Bua/Buí, an ancient goddess, or Cnó Guba, the Nut Lamentation.

Of further significance is that some ancient stone monuments appear to have alignments towards Samhain sunrises and sunsets. For instance, Duma na nGiall or Mound of the Hostages on Tara, has a passage that faces (broadly speaking) the sunrise on Samhain and Imbolc (November/February cross-quarter festival). Dowth's northern passage points towards Newgrange for Samhain sunset (pictured below in a view from the top of Dowth mound).


Cairn L at Carnbane West at Loughcrew (Sliabh na Caillighe) points towards Samhain sunrise, as seen in this wonderful video from Victor Reijs:


Another video of the Cairn L alignment by John Willmott features some beautiful photos set to gorgeous music: 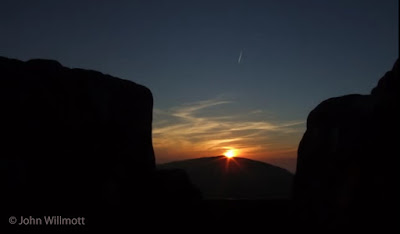