Over the past few years I've taken a great interest in the creatures of Irish myth. Among the animals that have great significance in the ancient mythology of Ireland are the bull, the cow, the pig, the swan, the salmon and the hawk. I've been greatly taken by the old story of Fintan mac Bóchra, said to have been the lone survivor of the great flood when he fled to Tul Tuinde and swam in a cave in that mountain in the form of a salmon, later transforming into an eagle, and then a hawk. A similar tale is told of Tuan mac Cairill, the sole survivor of the Partholonians, who relates the story of the Lebor Gabála (Book of Invasions) to St. Finnian of Moville. Tuan transforms into a swan, a boar, an eagle and finally a salmon. As a salmon, he is caught and eaten by the wife of Cairill, who gives birth to him again in human form so that he may recite the early history of Ireland.

Thus the personages of Fintan and Tuan come to represent the idea of the embodiment or survival of ancient wisdom. Fintan is the one to whom the people of Ireland turn for advice in The Settling of the Manor of Tara, when there is confusion as to how the lands around Tara should be divided up.

There are many characters, themes and narratives from Irish mythology that have inspired me in the writing of my latest work of fiction, a novel. This novel was completed earlier this year and was proofed and edited and is currently being considered for publication by a Dublin publishing company. The transformed druid in the guise of a bird of the air serves as a very vivid archetype for me, and one that I have borrowed for this latest work. 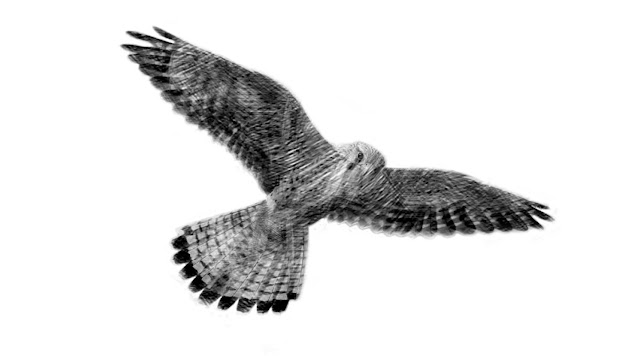 The novel is tentatively titled The Cry of the Sebac - sebac being the Early Irish form of seabhac, a hawk. This hawk relates how he has survived since the appearance of the first humans in Ireland after the retreat of the ice, and tells of his dramatic survival of the inundation in a cave in a cairn on the top of Tul Tuinde. He has lots of advice for a young boy whom he befriends. The novel is set in modern Ireland, but the hawk is very definitely a voice from the ancient world:


“One person can be more powerful than an entire army,” said the hawk. “That’s what Manannán represents – the power of one man to repel a whole battalion of enemies. They say that Manannán controlled the waves. He had learned to love the ocean, and all its murky and impenetrable parts, and all its harsh noises and bitter storms, and all its creatures, marvellous and grotesque, even down to its lowest depths. And when he learned to love even its most hideous and abhorrent parts, he became the ocean. Manannán and the sea were one. Thus, he was able to drive back the Fomorians, terrible and despicable and powerful as they might have seemed. They had no might that could match him. He was the indefatigable and undefeatable enemy. He was everywhere, and that was terrifying for them. Become the storm, and you will change the world.”

Following the hawk's advice to the boy, the youngster, in a trance-like state, perhaps reminiscent of a shamanistic dream, has a conversation with an unknown entity:


A familiar voice called out to him, softly.
“Why have you come here?” it said.
“I have come here to live forever,” he replied, after just a moment’s thought.
“It’s not your time. Why else did you come here?”
“To hear the Great Song.”
“What power brought you here?” the voice asked.
“The power of my own mind, which has existed since before I was born.”
“What did you bring with you to this place?”
“Nothing, except my imagination, and my soul bird.”
“Your soul bird?”
“Yes, he is the Sebac Gaoth, the Hawk on the Wind, the one who has lived beyond memory. He sees my thoughts and interprets my dreams.”
“And what dream do you have?”
“To heal the world.”
“But you’re just a boy.”
“One person can be more powerful than an entire army,” he replied.
“How did you calm the storm?” the voice asked.
“I didn’t calm the storm. I AM the storm.”

The antediluvian druid-bird is there to convince the boy that he is the 'Little Flame', a light for the world. And he encourages the boy to become the Samildánach, the many-gifted hero of light:

“So then, young flame keeper, the Samildánach who can see beyond obscure horizons . . . are you ready to look beyond all the known horizons, to a place in the unendurable darkness where the magnificent light will be made to shine again?”