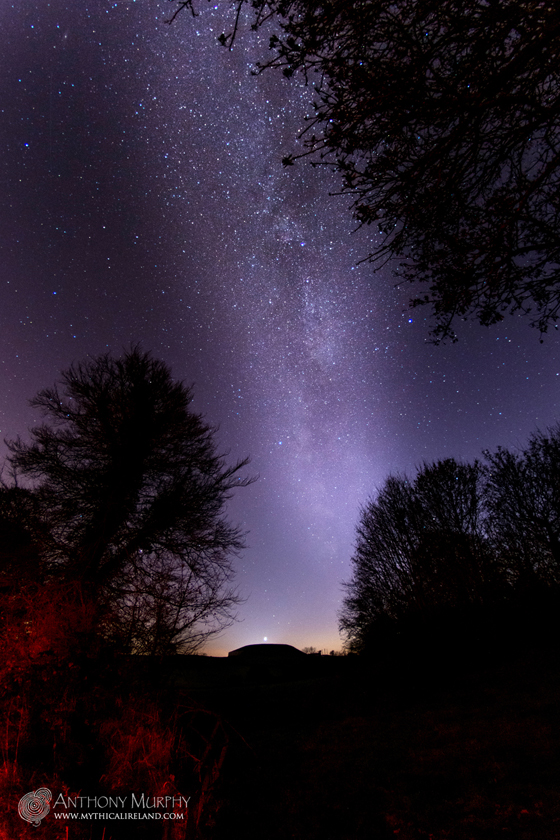 I spent a beautiful evening out at Knowth and Newgrange in the Boyne Valley after sunset this evening. It was cold, but clear, and the colours in the fading twilight were absolutely beautiful. The above photo shows something I have never captured before, and was delighted to get on camera. It shows the bright band of the Milky Way over Newgrange. It also shows, sitting just above Newgrange and about to set behind it, The Evening Star - Venus.
I had been in the Boyne Valley for over an hour after sunset, from around 4.30pm. Venus was easily visible in strong twilight and I got several photos of it with Newgrange. But just as I was about to drive away to go home, I stopped at this viewing location and could see that the Milky Way was visible. So I jumped out of the car (which was still running) and put my 8mm wide angle lens on the camera and quickly set up for a 25-second exposure. It was very cold out - just 2 degrees celcius - and my fingers were numb from all the standing around over the previous hour and a half.
However, this shot, taken at 5.53pm, was well worth the effort I think. I'd safely say that's the earliest time after sunset that I've ever taken a photo of the Milky Way. And I'm glad I did. I drove home with a big smile on my face. Five minutes later and Venus would have disappeared behind the ancient mound of Newgrange.
It's nice also to have captured a photo of the Milky Way above Newgrange. In ancient times, the Milky Way might have been known as Bealach na Bó Finne, the Way of the White Cow, and the goddess who was venerated in the valley and who gave her name to the Boyne River was Bóinn, the White Cow goddess. It's likely that the Milky Way was seen as a heavenly reflection of the Boyne.
This is a scene that, as the builders of Newgrange would have well known, will only be repeated once every eight years...
Back to blog