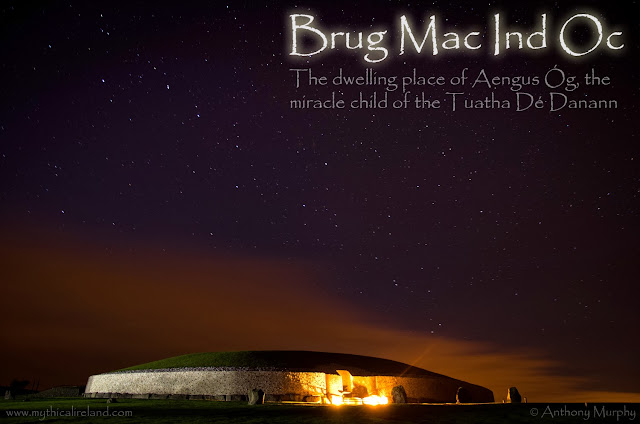 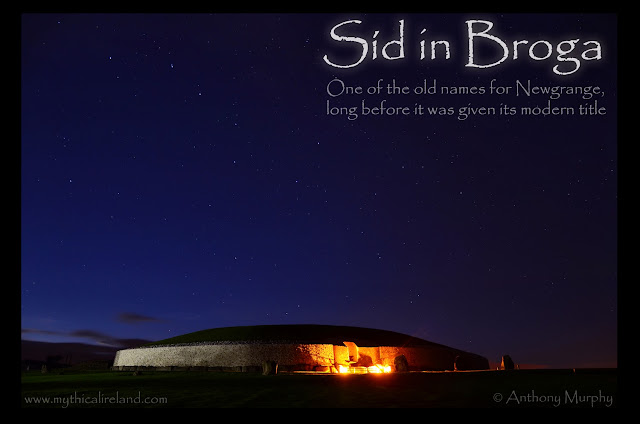 Two photos of Newgrange taken last night, on a beautiful October evening, with Ursa Major (The Plough) hanging in the northern sky above the monument.

Two of the ancient names of Newgrange are represented, Síd in Broga and Brug Mac Ind Oc.

The name Newgrange was given to the monument in the 12th century by the Cistercian order, who had established the nearby Mellifont Abbey and come into ownership of all the lands down to the Boyne.

The name the 'New Grange' was given to the field which contained the monument previously known by various names, including the above. That's the name by which we know it today, but it is a relatively modern sobriquet.

The older names, given in medieval manuscripts, go back into the pre-Christian past. Síd in Broga, rendered Sí an Bhrú in modern Irish, means something like 'the mansion of the otherworld mound' – mansion or abode from broga/brug and otherworld mound from síd. Brug Mac Ind Óc means the mansion or abode of the young son, Oengus Óg, whose name derived from the miracle of his conception and birth taking place in a single day.

The story of how Oengus came into the possession of Síd in Broga from his father, The Dagda, the chief of the gods, is related on this page.